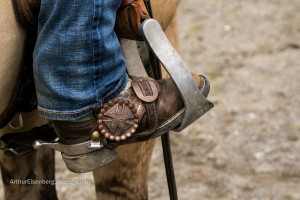 Well, not these specific barrels but a blue one similar to these.  It seems a blue one is missing from Ridgeview’s stock at the fairgrounds.  It was ok though because Saturday was the Ulster County Sponsored Open Horse Show to benefit 4H.  The weather cooperated after dumping what seemed like an inch of rain locally.  Although the arena was dragged for an hour, it remained deep, muddy and wet!  I don’t often announce at English shows and when I do, we have walkie talkies and a ring steward standing next to the judge.  At this show we relied on good old fashioned yelling.  The judge, Heather, was awesome as she trained each of us on jumps, ground poles, proper etiquette and language.  She sat next to me in the booth for a good portion of the events, explaining how to properly call the riders to the ring.  It seems unlike Gymkhana, where we have an order of go, English riders get to choose who goes first.  “After you”, “No after you…” That would be great if the riders were wearing a number on their front.  But they don’t, the number is pinned to the back of the rider and that makes things a bit more complicated.  Ring steward yells to booth, 51!!  Booth answers, 50 what?  We managed though and the show moved along.

I also learned half way through the show that after each event when the riders lined up with their backs facing the judge that if I didn’t tell them to walk off after the winners were called, they would stand there patiently, for a long time.  Several times I wanted to call out, “Back up, now turn left, etc..”  The judge wouldn’t let me have any fun.

As it turned out, there was only one Western rider at this event.  I’m sure due to SUNY New Paltz’s graduation, the Gardiner Cup Cake Festival and a host of other summertime activities, were the reasons.  Maybe next year will see some adults too.

Today was the Ozzie Morris Clinic held at the same place, only this time we had even more rain.  That and it was hot as Hades out there in that ring.  No announcer is needed for these events because if you can’t hear Ozzie, you better learn to read lips.  Nothing gets you jumping jacks faster than not paying attention.  They waited for the ring to dry a little which put the start time later into the morning.  It was a good turn out, and I’m sure that people will be using what they learned at the next show, May 31.

Although Ozzie didn’t do it at today’s event, he has in his lessons.  Ozzie will ask you lope a circle and let you figure out which lead you are on.  So, you’ll need to call out your lead within three strides.  For those that don’t know what horse leads are, here is a good explanation.  The reason I’m bringing this up is because if you are asked to canter or lope in a horse show and you are on the incorrect lead, you will lose points.  Two out of 4 riders in a flat division were on the wrong lead for the entire time they cantered.  Not that anyone is reading this, but if you do, maybe a little practice to recognize lead changes the next time you ride.  It’s a shame to see riders lose points for something easily fixed.

The other thing I learned at the show is that it is easier to set up barrels for a course than it is for jumps.  Especially, if it’s muddy.  So, if you know where the blue barrel is, roll it on back to the arena because it’s called Clover Leaf Barrels for a reason.  🙂

The Gymkhana was the first one for Falcon Ridge this year and the first of 6 events in the Buckle Series.  This is Falcon Ridge’s second year holding Gymkhanas and it looks like suggestions made last year were implemented this year.  Paul expanded the arena and added deeper footing which now includes a nice alleyway for stopping!

There was a good turnout in spite of the fact there was an event at Thomas Bull Park.  Looking forward to the next event.  I came home with 2nd place, which isn’t bad for the first time out!